After an initial release in August 2017 Rise of Insanity is now making it’s way to Nintendo Switch. Originally created for use with VR, this psychological horror/thriller looks to set knee’s knocking with its immersive narrative and creepy aesthetics inspired by North American architectural trends of the ’70s, but can it deliver the heebie-jeebies in such a crowded genre? let’s take a look.

Stepping into the role of renowned psychologist, Dr Stephen Dowell, you must uncover the mystery surrounding a patient who suffers from a severe multiple personality disorder. Along the way, the mystery of what happened to your missing wife and child is explored while everything around you is not as it seems.

The game is played in the first-person perspective

Starting things off we were sat in a dark and dirty room watching a movie projected on the wall. As the images become more disturbing the room around us begins to warp before pulling us through a dark abyss into a decrepit asylum. From here we begin progressing through what can only be described as a series of memories or events.

Each one adding a new piece to the puzzle with touches or narrative and puzzle-solving to aid progression. The puzzles are usually quite basic, if a dark entity was blocking access to a room, simply find a way to switch on the lights, chances are the light generator needs a fuse to walk around until we found the fuse to solve the issue. Narrative primarily takes the form of tape recorders which provide audio log entries as well as a selection of written items scattered around from newspaper clippings and notebook entries. 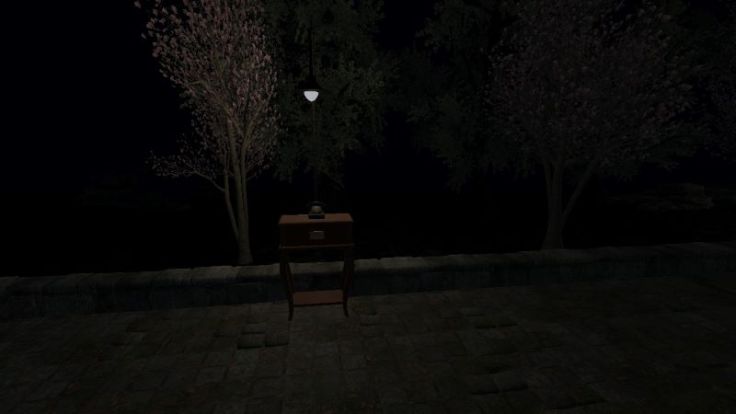 While progressing through a series of locations from the Asylum to a family home, gardens and beyond we begin to revisit each area only to find it had changed and warped, granting access to different rooms within. The problem here is that each area is very small and our time in each one was short-lived making it difficult to really get a feel for the story that’s attempting to be told. Most sequences ended with a phone ringing to indicate we had found or seen what we need to in each area, upon answering the loading screen pops up and whisked us off to the next event. To mix things up the second half had us exploring strange formations featuring items from the real world in an attempt to add a surreal feeling but all it achieves is revealing the obvious plot twist in a heavy-handed manner.

These types of horror games have become very prominent over the years and the formula of walking around, searching rooms, reading notes and collecting things wears thin without anything engaging to back it up. Rise of Insanity attempts to keep players on their toes by providing the odd loud noise, flashing light or the sudden appearance of a spectre but at no point did we ever feel connected to the experience or remotely consider that our character may be in some form of danger turning the whole experience into another generic walking simulator. Our only conclusion is that something has been lost in the translation from a VR experience to playing a regular version. There is no word yet on whether the Switch version is supposed to be enjoyed with the Labo VR kit but on the big screen and in handheld it lacks any form of punch.

Overall performance was fine for what it offered

Despite regular loading screens, these were thankfully very short but still managed to break any attempt at becoming engaged with the story. Graphics are clean but don’t stand out on the switch system, especially with so many similar titles looking the same. Sound design is the hero of the piece with some great music and decent voice acting provided throughout.

Rise of Insanity was a short experience that was done in one sitting in under two hours with not so much as a clenched buttock to speak of. The story tries to be engaging but falls flat due to being too obvious and providing no sense of threat for the player. In VR the experience might have been better if only for the more immersive experience but in its vanilla format, it just feels like something we have seen before too many times.

One thought on “[Review] Rise of Insanity – Nintendo Switch”