After a successful Kickstarter campaign, MindSeize was originally released for Nintendo Switch on September 30th, 2020. To celebrate its anniversary, “First Press Games” and “Kamina Dimension” not only have an upcoming physical release scheduled for December (available for pre-order), and not only have permanently reduced the digital game price by 25%, but they also spent almost 6 months working on the 1.1.0 major update patch (physical version will ship with this version) to make it all just a little bit more worth your while.

It’s All in Your Head… Kinda

Metroidvania games seem to be all the rage, especially in the Nintendo indie circuit these days. Some have what it takes to stand out from the crowd and be remembered. Some are better off to wait for a sizable discount, and let sit in the backlog for a moment when you just feel like playing something new. And some are just better off forgotten. MindSeize sits somewhere between the first two sections. It strongly benefits from the updates and lower price and definitely has what it takes to not be forgotten. MindSeize is a pixel art, 2D action platformer. set in a futuristic sci-fi universe that is worth your time.

The story is enough to get the player involved without being too overbearing. An alien organisation called The Ascended has stolen the conscience of your daughter and left you, Investigator M.C . Fox, unable to walk. It is now up to you and your crew to solve the mystery of what the Ascended are up to and rescue the conscience of your daughter. Your mind is tethered to a mech suit that you control as an avatar/extension of your body. In the stages between being attached to your mech suit, you navigate in M.C.’s wheelchair. This was a nice touch, because you don’t see this represented in main characters in video games that often.

As per the standard Metroidvania formula, not only will you spend your time blasting and slicing the various enemies of the biome, but also searching every nook and cranny for hidden areas and items. You know those ledges are just out of reach for a reason, so be on the lookout. It will take a good eye to spot several of them and then a full tank of tenacity to get to them even after they are found. 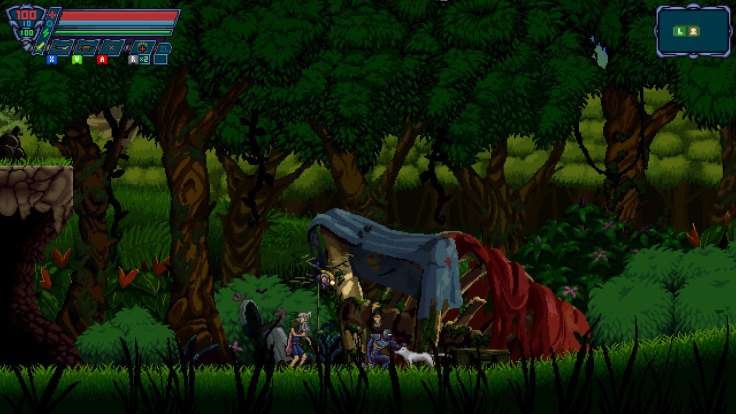 The exploring is fun, but the combat is where the game keeps you going. M.C. begins with basic attacks but he is able to find and unlock new weapons and upgrades. These upgrades unlock much more options for fun and engaging combat. After a new weapon is owned, it can be upgraded at a workshop at ship portals or by a “merchant” role on the ground. The pixel art environments offer a beautiful backdrop for your slaughtering of never-ending enemies (they respawn when you leave a screen and go back, which is a nice way to grind some extra currency for an upgrade). Though the combat generally feels smooth and tight, there are occasional circumstances where enemies exist just above or below “hitbox” range, but it’s not game-breaking and you adapt to it with a little expectation and planning. After a few weapon upgrades, you won’t even think about it.

The bosses, on the other hand, will beat you up. Unlike a lot of the enemy fodder you wade through during the main areas of the biomes, the bosses are relentless and will not let up until one of you is dead… as it should be. Finally defeating a boss that had its way with you several times felt satisfying and worth the trouble put into it. Even if a few of those deaths were more about missing the rhythm of jump climbing and just getting knocked back down when you reach the top, just barely squeaking out that win felt rewarding.

MindSeize could easily have been another dime-a-dozen indie Metroidvania and been moderately successful at that. Though it may have a tough time competing with a certain other AAA Metroidvania that came out in the same window as the upgrade patch, it does hold its own value. With its fun combat, beautiful pixel graphics, quality of life and gameplay improvements as well as the permanent price drop it definitely has more than the ability to scratch that sci-fi Metroidvania itch.