The Wonder Boy/Monster World series is absolutely wonderful! And the fact that not only did Wonder Boy III get remastered, but there was a new entry in the series with Monster Boy & The Cursed Kingdom (easily my top game of 2018) made me so happy. So, when I found out that Monster World IV was getting a remake, I was elated!

You play as Asha; a gifted young girl who can communicate with spirits. The game starts off with Asha hearing cries for help. She heeds the call and sets off to save the spirits and restore balance to the world. Playing the game side-by-side with the original, Wonder Boy: Asha in Monster World is a shot-for-shot remake. There are a few updates, though.

First off is the most obvious, the graphical changes. Opting for a more 2.5D effect over the original 16-bit style, the game does have better graphics, but that doesn’t always equate to a better-looking game overall. I feel like the original had a lot more charm to it and the movements looked much better. With the new graphical style, everything seems more… robotic. I do enjoy how they handled moving into different rooms and changing plains, though.

In the original, the player would simply walk into a doorway and be in a different area or plain, the remake actually allows the player to run towards the background and foreground. This is a personal gripe, so take it for what it is, but the new visual presentation did cause a bit of motion sickness during certain parts. This is something that made me have to frequently take breaks from the game where I normally wouldn’t.

The basic gameplay hasn’t changed much from the original Master System version. You have a regular sword slash, a jumping downward slash, and a jumping upward slash. A “magical hit” has been added that can be charged by hitting enemies. This only really serves to dispatch enemies more quickly. More moves are added with the Pepelogoo, most notably the double jump. This is where it gets a little tedious. 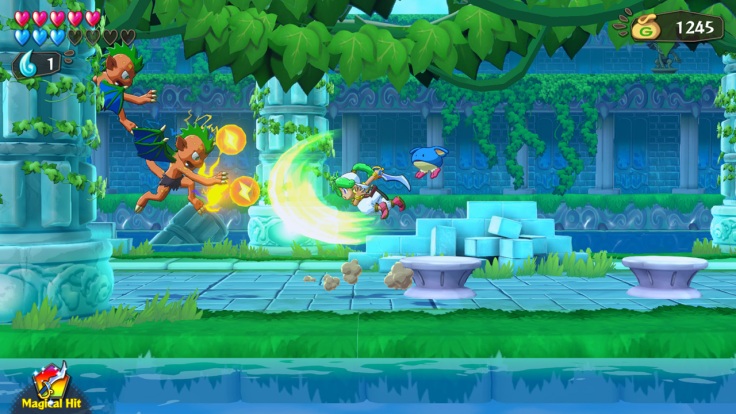 Every time you need to double jump, instead of the tried and true method of pressing the jump button again while in air, you have to call the Pepelogoo to you, grab it by the feet, and then jump while in mid-air. This is especially frustrating when you have to perform several double jumps in a row and have to wait for the Pepelogoo to come back to you before performing another. It becomes infinitely more frustrating when the Pepelogoo grows to a size that Asha is unable to walk while carrying.

The music is great

It’s more or less an upgraded and more polished version of the original soundtrack, so not much to say there, but it does sound great. There is some change in dialogue and I feel like some of it is “dumbed down” from the original. For example: instead of “you have procured (item)” it now says “you got (item).” Maybe not a big deal, but it did kinda bother me. Also, one of my favourite dialogues in the original is when leaving town, an NPC says “We all hate you… just kidding!” This was changed in the remake to “Bring me back something good… just kidding!” which I didn’t think was nearly as funny.

With the high bar that was set by Wonder Boy III: The Dragon’s Trap and Monster Boy & The Cursed Kingdom, I feel like Wonder Boy: Asha in Monster World just didn’t hit the mark. While it’s not a bad remake, by any means, I do feel like it is an ungraceful remake and doesn’t have the same charm as the original. Although, if you do purchase the physical edition, you do get the original game as a bonus, so you can play the two side-by-side and decide for yourself.