You still don’t know what you’re dealing with do you?

For many, Disney’s acquisition of Fox left a lot of fan’s feeling more nervous than Lambert on a rescue mission, how would the corporate powerhouse of mouse handle owning so many R-rated franchises and more importantly, what sort of treatment would they be given. Considering that in the eyes of many Disney have managed to turn Star Wars from a much loved, thrilling adventure to bland political tick boxes in the space of a few years and are slowly doing the same with the MCU, are we really to trust them with handling Aliens!? At this point, I’d rather check out a grid reference from Carter Burke. 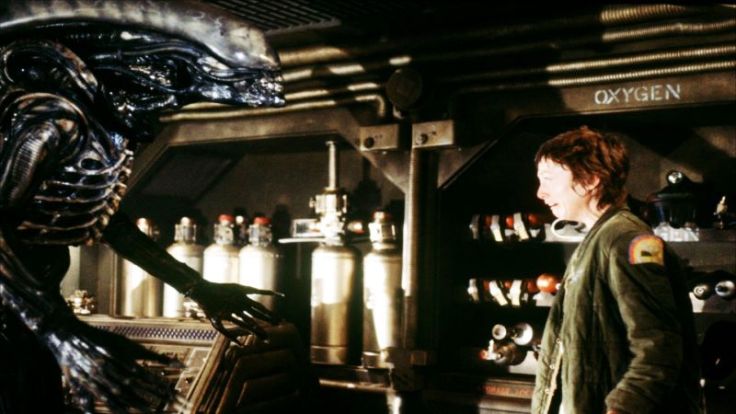 Well it’s here, and I think it got Clemmons! the first taste of what Disney/Marvel have in store for our beloved Xenomorphs, I must say, I was more than a little tentative about checking this one out, as a long time fan of the Alien saga (not you resurrection) I have seen my fair share of up’s and downs for the franchise across various media. So does this comic book outing live up to the classic extended universe stories from Dark Horse Comics? Does it hit the same sinister notes as Ridley Scott’s terrifying classic or carry the same pulse-pounding sequencing of Cameron’s magnum opus? Ease down… ease down… ease down and join me on an express elevator to hell to find out.

What did you see in the Dark?

The comic opens with a nightmare sequence before cutting to Epsilon Orbital Research and Development Station, January 2200, as our lead character Gabriel is having a counselling session with a Bishop model android. It appears life as a Marine and a particularly horrifying mission has proven too much for Gabriel and he is now retiring from Weyland-Yutani.

After giving a speech at his retirement party he heads home to earth to try and reconnect with his son Danny. Unfortunately, his son is now a member of an anti-corporate organisation known as Pro U.A who are bent on exposing the lies of Weyland-Yutani. Danny’s sole reason for visiting his dad is not to catch up on old times but to steal a data chip containing Weyland files which he succeeds in doing. 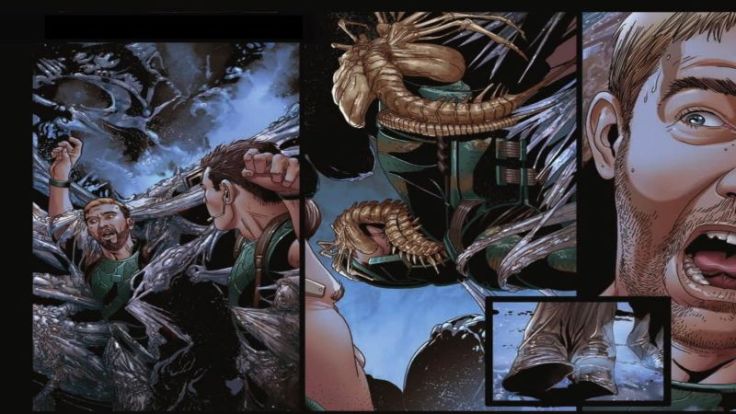 During another counselling session with a new Bishop android, Gabriel mentions he saw the Bishop from his mission as a friend and reveals he is sick and dying, not sure how long he has left all he want’s to do is tell his son what he saw in the dark. More images of nightmares from the mission involving an Alien hive emerge.

Back on Epsilon station a vessel docks and a group of hipsters shoot their way onto the station, Danny is among them. Having used the info from the stolen data chip they believe some evil doing’s are happening aboard the station but what they find is far worse. Entering a biological containment room their trigger happy ways result in the escape of several facehuggers which leads directly to our cliffhanger ending.

Although the story set up doesn’t seem to be anything strikingly new and follows a slightly predictable path I enjoyed how it was set out. Gabriel is a man who has clearly seen some horrifying things during his time with Weyland-Yutani and it’s obvious he is going to get called back into the fray to save his son. His sickness however, could be interesting, is the sickness related to his incursions with the Xenomorphs? How will this unfold going forward, this is one of the two good hooks from this issue.

The second was in an early glimpse of the Alien hive, there was a new form of Xenomorph, an almost human-looking female. Who or what she is will likely be a big plot point for this series and from a design aspect alone it is an intriguing one.

One thing I didn’t enjoy was the activist’s arc, this happens a lot in plot’s of this nature – just think back to 28 Days Later. Activists technically have good intentions but they all come across as complete and utter twat heads and tend to cause more harm than good. Danny is just a grade a prick and I have no interest in him at all, hopefully he get’s munched by an Alien but most likely he will be a strong plot point as Gabriel tries to save him. I can only hope the writing and presentation of him improves or if all else fails, they just freeze him.

The real star of show here was the artwork, the artist, Salvador Larocca has done a fantastic job with the drawings and each character looks unique with particular props going to capturing the likeness of Lance Henriksen for the Bishop androids. The Xenomorphs themselves look great too, returning to the original Big Chap version we were introduced to in 1979 though their time on page has been minimal so far, this is a good thing as we need to establish characters to get behind and root for before throwing them headfirst into the meat grinder and Alien has always been best with the less is more approach.

Not a bad start, nothing blew me away and it is early days of course but I can see myself following this series if it keeps the balance of character development and intrigue intact. I enjoyed the brief glimpse we got of earth though it looks more common Hollywood than the industrial slump we were made privy to during the movies. If you are a fan of Alien and of course a comic book reader, I would recommend picking this one up.