On January 12th, 1966, an explosion of camp crime-fighting kapow-ed its way to an explosive debut when the Batman television series made a dazzling splash across American screens!

First discussed in the early sixties, when ABC Television executive Yale Udoff mentioned the Batman character to studio bosses who had already been planning a television series based on a comic book character, it ended up being 20th Century Fox who were tasked with making the show for ABC. Wanting something in the same light tone as the successful Man From U.N.C.L.E television series, producer and non-comic book fan William Dozier decided that a fun and fresh Pop Art-style approach was the only way he could make the show work. Understandably, really, considering the show would be about men in tights fighting crazed clowns and puzzle-obsessed criminals and seeing as pop culture at the time was booming. 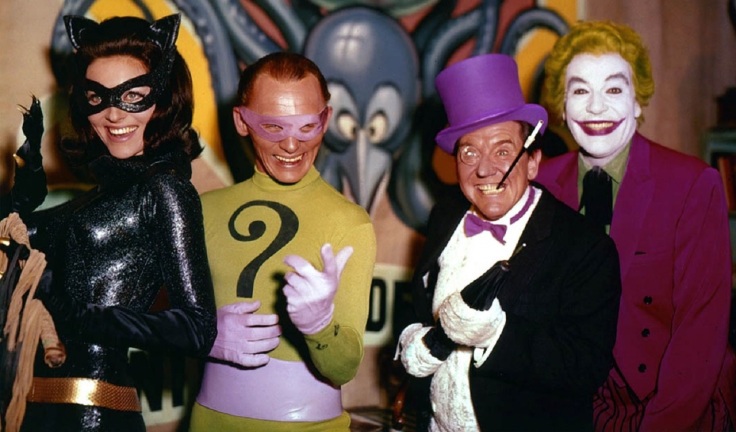 Inspired in part by Hugh Hefner, who would show old black & white 1940s Batman serials for guests at his Playboy club during the sixties (where guests would cheer the heroes and boo the villains as they appeared on screen), Dozier would go on to describe the show as ‘the only situation comedy on Television without a laughter track’.

Geared towards a younger, hipper audience, with a camp style and upbeat music (along with gently preaching about good morals and doing well in school), the show was a big hit and, although only on screen for two years and 120 episodes, the show was an instant hit and has become entrenched in geek culture.

Initially showing two episodes twice-weekly, ending the first part with a dramatic cliffhanger and an adrenalin-pushing voiceover leading to the second part story conclusion, the show focuses on the dynamic duo of Batman and Robin as they protect their home city of Gotham against myriad colourful villains each week. Later, they would add three-part stories and by the third and final season each episode was a fairly self-contained adventure.

Starting with the words “This is an ABC colour presentation”, the first two episodes, a two-parter named “Hi Diddle Riddle” and “Smack In The Middle” respectively, do a fantastic job of introducing the viewer to the world of Gotham and plunges them straight into the Gotham City World’s Fair where, at an opening ceremony, a visiting Moldavian dignitary slices into a cake which explodes and reveals a puzzling riddle.

We then see Gotham City Police Department where Commissioner Gordon and his chief of police suspect the Riddler (“That infernal prince of puzzlers”) but are at a loss and, realising they only have one option, turn to look at a mysterious red phone on the Commissioner’s desk… 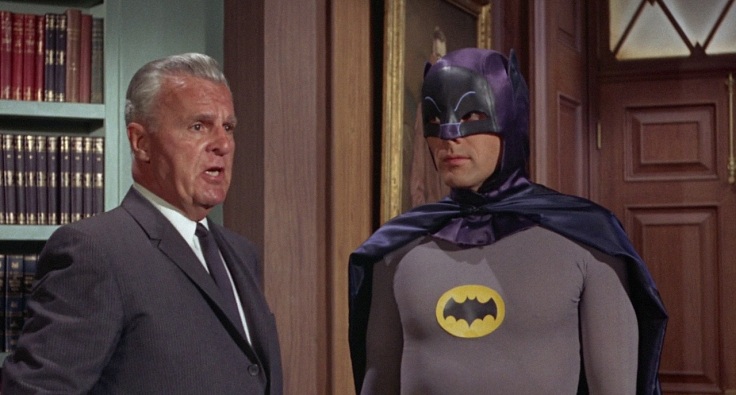 “I don’t know who he is behind that mask of his, but I do know when we need him and we need him now!”

We then go to Wayne Manor where the butler Alfred interrupts dashing millionaire Bruce Wayne as he talks to some city bigwigs about how if there had been more anti-crime centres in the city his parents may not have been murdered.

Upon hearing that he has a call, he tells his guests that he promised his young ward Dick Grayson that they would go fishing, and he makes his excuses and leaves. It’s a fantastic bit of writing that leads into the opening credit sequence with that fantastic theme tune and an animated sequence of criminal bashing, and then with a ‘SOCK!‘, a ‘POW!’ and a ‘ZOK!’ we’re off! All of that sets up everything we need to know about the show and we’re less than four minutes into the pilot episode!

The series was an instant hit and the narrator (producer Dozier) ending episodes with “Tune in tomorrow, same Bat-Time, same Bat-Channel” made viewers eager to hurry back for the conclusion to the first episode cliffhanger.

The 1966 Batman movie, which is incredibly ridiculous and highly entertaining (“Some days, you just can’t get rid of a bomb!”), was actually intended as an introduction to the TV show but the series was moved forward and so the movie was released after the first season aired. This meant that, due to the higher budget for the film, the TV show could use expensive film props such as a speedboat (the Bat-boat) and helicopter (the Bat-Copter) making it look far more expensive to produce than it actually was.

A huge amount of merchandise was produced to tie-in with the series and movie.

Everything from trading cards to colouring books to toys and collectables were made available and over the years these original items have become must-haves with collectors trading them for large sums, as you can imagine! I remember as a kid in the eighties having a Batman and Robin alarm clock that would probably be worth a fortune but has been long consigned to a dustbin somewhere, boohoo. Thanks, Mum!

It’s impossible now to imagine anyone but Adam West and Burt Ward in the roles of Batman and Robin but, initially, studio bosses wanted the actor Lyle Waggoner to play the lead role. He later went on to star as Steve Trevor in the Wonder Woman TV show!

Interestingly, West only won the role after producers saw his performance as a James Bond-spoof in a commercial for Nesquik milkshakes and thought he would suit the part of Bruce Wayne/Batman! Burt Ward had never really acted before and only auditioned to play Robin due to his love of comic books! Due to the nature of his costume, showing more of his face as it did, he was required to perform more of his own stunts than West. This saved the budget (he was on minimum wage and got paid no extra for his stunt work) and sent him to the emergency room on numerous occasions!

As an aside, Frank Sinatra once expressed an interest in playing the Joker!

There were many fantastic actors and actresses in the series from Caesar Romero, who refused to shave his moustache to play the Joker and so simply covered over it with thick layers of make-up (it’s very obvious) to horror legend Vincent Price, who played the villainous Egg Head.

The stunning Julie Newmar played Catwoman in the first two seasons and clearly inspired both Michelle Pfeiffer and Anne Hathaway when they played the role (1992 and 2012). Catwoman was played by Lee Meriwether in the 1966 Batman movie and by Eartha Kitt in the final season of the show).

The show was popular enough to attract many celebrity cameos. Many of these were featured as ‘faces’ that appeared peering out of windows as the Dynamic Duo used their grappling hooks to scale a building. Some of the more famous of these include:

Interestingly, the famous L.A. hairdresser Jay Sebring, who was murdered by the Manson Family, appeared in an episode effectively playing himself. 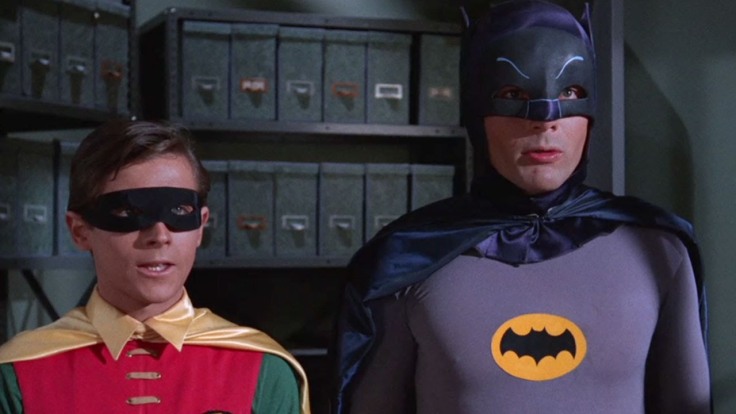 Let’s talk about that theme tune for a second because it’s a classic!

There is a long-standing rumour that the dozen or so cries of ‘Batman’ we hear as the chorus of the theme tune is not singers at all but is actually a wall of horn-players blasting the two-note rhythm. However, the writer of the piece Neal Hefti confirmed that eight singers were used. Don’t believe everything you read, folks.

It’s worth remembering that English rock band The Who once recorded a version of the theme and that Snoop Dog sampled it for one of his tracks! One last Bat-fact for you; the original Batmobile was eventually sold at auction for $4.2 million!

Ok, so perhaps each episode is basically the same (something happens, Batman and Robin are called away, Commissioner Gordon spouts exposition, the Dynamic Duo investigate the case, they’re trapped/captured, they escape, there is a fight, our boys win, and then there is a moral lesson) and it all is very predictable but it’s all so damn charming and fun it just does not get tiring!

It’s a fantastic show, essential viewing when you need cheering up and are willing to put your jaded 21st-century brain aside, and if you can’t enjoy it there is probably something wrong with you and I might just kick you in the shins.

Batman: The Complete Television Series and the 1966 movie are both available on DVD and Blu-ray now!