Ratalaika Games are back with another offering of retro-themed, wallet-friendly gaming goodness with More Dark, a puzzle platformer where you must traverse the ghoulish chambers of hell in order to impress the devil’s daughter. But is this hellacious platformer too hot to handle or too cold to hold? Let’s take a look.

The first thing to mention about More Dark is there isn’t much in the way of a plot, by comparison, Rise of Skywalker had more depth than this one. The game starts with near enough a one-liner that indicates that the Devil has gone away and left his daughter in charge but she’s a lazy bugger and has spent all her time posing on Instagram instead of doing her job so now the prisoners of hell are running free. So now it’s down to you, the little red man with a dashing moustache to stop the escapee’s and impress the boss. To be fair, it’s a simple enough setup and wastes no time and getting down to business and thrusting you into the gameplay, just don’t expect any memorable or ongoing narrative to pop up as you progress. 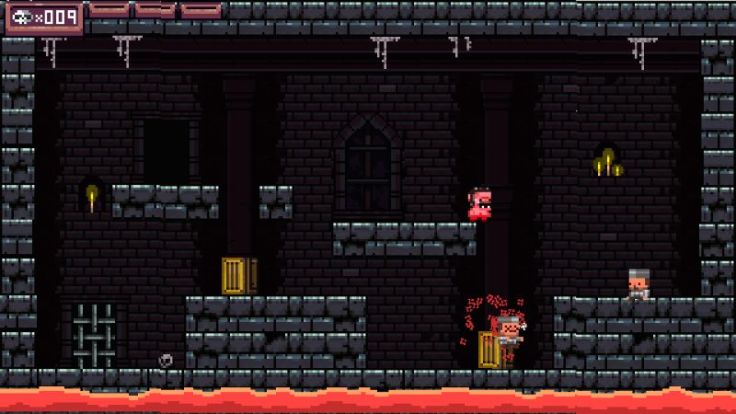 Chances are most gamers are familiar with the formula Ratalaika put’s out by now, in fact, we’d wager that a good portion of gamers would have invested in at least one of the titles on PlayStation just to sample their notoriously easy Platinums. The majority of their platformers draw heavy influence from the 8-Bit days and are absolutely smothered in retro visuals and set up. More Dark is no exception to this rule, you are given a grid which will consist of sixty levels to work through, but don’t panic, these levels are very self-contained and short to progress through making More Dark a great title to play on the go.

Whose castle is this?

Each level is its own little dungeon with the goal being to kill the escapee and send them back to hell by either jumping on them or killing them with various items then head to the exit, the exit will only open once the escapees have been killed. The platforming is as simple as you like and straight out of the Super Mario playbook, but the real emphasis of More Dark is on the puzzle element of the levels. An easy example of this is in one of the earlier levels, the escape door is on a high platform which you can’t reach with a regular jump so you must time your jump to land on the escapee to kill him and use that bounce to reach the platform and exit the level. Not to worry if you miss time your jump as any level can be easily restarted with a tap of the X button.

As you progress, the levels become more elaborate and require a bit of brainpower to correctly manoeuvre certain obstacles and objects such as aligning crates to access certain ledges or avoiding traps and hazards. You will also unlock a series of abilities to utilise along the way such as the ability to embrace your inner Lionel Ritchie by walking on the ceiling or the ability to use bombs. The progression in More Dark is really well balanced with the complexity of levels escalating at a steady pace, ability unlocks coming at just the right time as well as a good dose of boss levels thrown in to keep things fresh.

Like with most of Ratalaikas offerings, the comparisons to certain classics cannot be avoided and TBG has played our fair share of these titles over the years. There is fun to be had but it often comes in short doses, partially because the titles are bite-sized by nature but also because the doppelganger set-up just reminds us why we love the titles of old over the increasing amount of pretenders. 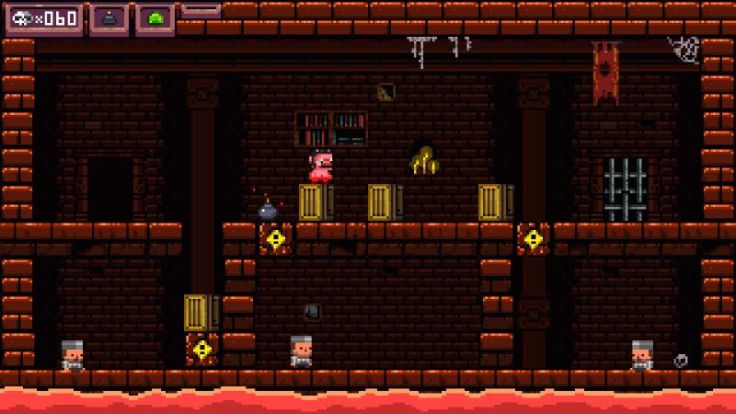 From the simple platforming to the fun but not overly challenging puzzling, we have seen this all before. The old school graphic design is a delight and traversing through the dungeons of hell to catchy retro music and sound effects is charming especially at a handsome price of £4.99/$4.99 but it all feels too much like a throwaway experience at this stage.

If you are a die-hard platform puzzler fan with a taste for the retro things in life, More Dark might be just the ticket. At a price point that won’t damage your wallet ou will get a quirky title to keep you busy for a couple of hours, but in this reviewers experience, there is nothing that will give any lasting memories or have you coming back for more. As far as throwback experiences go, it ticks all the boxes but we can’t help feeling like it’s time for these titles to stop living in the shadows of giants.