If you’re going to do something, you might as well be the best at it. At least No More Heroes leading man Travis Touchdown thinks so. Bloody, vulgar and full of anime t-shirts, No More Heroes is a hack and slash adventure game about becoming the number one assassin.

The game is split into two main sections.

No More Heroes divides into the hack-and-slash fighting portion and the explore the town portion. Essentially you are taking the top ten assassins out one at a time, and in between you can ride your mega motorcycle around town to complete side quests, find secret items, go shopping or build your characters stats. It gives a nice pacing to the game, but also slows it down at the same time. The town is mostly filled with empty space that tasks you to drive around it, but sprinkles some collectables here and there for the adventurous player.

In order to progress the story, you have to pay for the privilege to take on the next assassin ranked above you. This means the game forces you to do side quests in order to earn some extra cash to pay your way into the beat ’em up sections. These range from things like “kill these group of people as quickly as possible” to “grab as many coconuts as you can”. It’s a fairly diverse spread of mini-games, but they all take a while to complete. Be sure to take this time to upgrade your weapon and do some squats for additional health.

When you are doing the hack-and-slash portion, you have a pretty unique and fun fighting system to use. After each enemy you cut through, you’ll get what’s called a “death blow”. The death blow gives you a prompt and if done correctly will automatically spin slots that sometimes give you special attacks. It’s really clean and fun, and since Travis is a wrestling fan you can also throw in some close combat wrestling moves to take down enemies. The game rewards you as you go with unlocking additional moves. 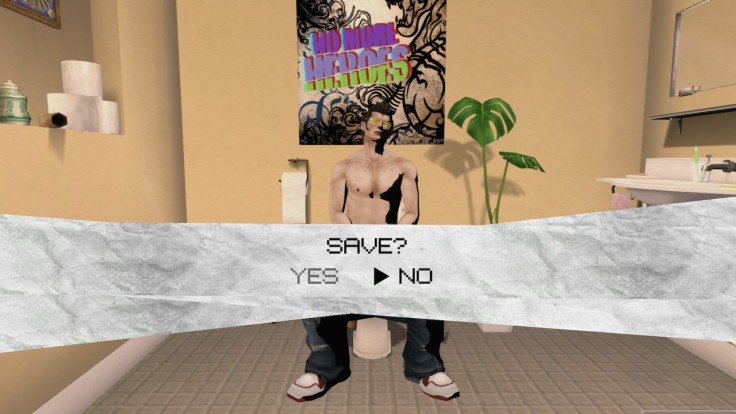 This HD remaster was originally released for the Wii in 2007 and later as an enhanced edition for PS3. Cell shaded graphics are timeless, screenshots in this article will confirm. Colours are bright and vivid, and the characters are not only brought to life with the art, but with the dialogue as well. The story is carried by all the weird interactions you’ll be apart of, and you’ll be driven to keep playing just to bask in it. BOSS BATTLES offer the best of this, with each ranked assassin being crazier than the last.

No More Heroes is a cult classic for a reason. It’s chock full of interesting characters, great art, and ridiculous scenarios that are topped off with a unique fighting system. It suffers from some repetition that’s common in the genre, but with a solid price point there’s no reason not to join Travis Touchdown and his journey to be the best assassin.

One thought on “[Review] No More Heroes – Nintendo Switch”