Forgive me, readers, for I have sinned. I confess that the title of this piece is misleading.

Star Trek: The Next Generation never did a true Christmas episode, as far as I can remember, and they certainly never devoted an episode to an Enterprise-set version of Charles Dickens’ A Christmas Carol. However, the timeless festive tale does feature in the Season 4 episode “Devil’s Due” and we’re going to dive right into it, scene-by-scene (kinda).

We soon realise that we are watching a holodeck performance that is being critiqued by Captain Picard. Data stops performing and the pair discuss his acting and how, although he cannot feel the fear of Scrooge as he is confronted by his ghosts, he has observed humanity enough to be able to emulate the responses that terror can produce. Data then questions whether Picard has heard of the Method style of acting (“I’m vaguely familiar with it”) but the pair are interrupted after Riker calls them to the bridge. 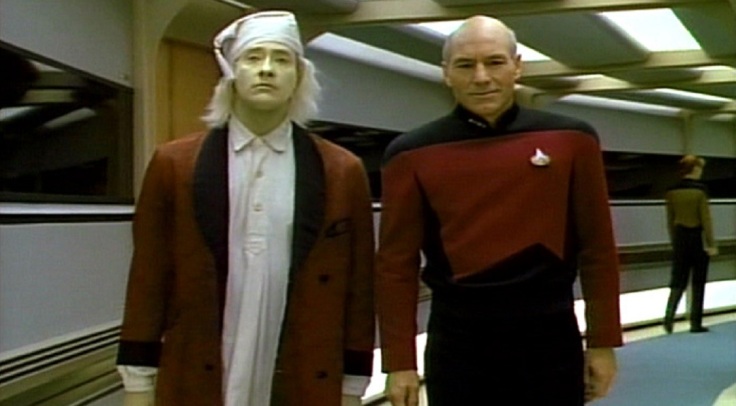 Ventax II, an inhabited planet with a Federation-supported scientific outpost, is under attack. The Enterprise speeds to the planet and they beam aboard the scientist in charge of the outpost, Doctor Howard Clark. He tells them that Ventaxians, obsessed with their planet’s mythology of an entity named Ardra, believe that their world is coming to an end.

Many hundreds of years ago, Clark goes on to explain, the Ventaxians turned their backs on technology and became a peaceful agrarian society. Effectively isolating themselves from the rest of the galaxy, they continued living this way until contact was made with the Klingons several decades previously. Eventually, the Federation set-up their scientific outpost to monitor the Ventaxians and to encourage them into engaging with other societies outside of Ventax II.

However, the head of the planet, Acost Jared, has become obsessed with the Ardra legend that states that the earlier Ventaxian civilisations had exchanged their souls in a deal with the devil (the Ardra) and now the devil was coming to collect. There are signs of the Ardra’s return, with the ground trembling violently, and the people are convinced their world is ending hence the rioting and attacking of the outpost where Dr. Clark’s people are being now held hostage.

Picard, along with Data, Worf and Troi, beams down to the planet along with Dr. Clark and attempts to meet Jared and settle things peacefully. Shortly after they arrive, however, a mysterious woman appears. “Time’s up!”, she declares, revealing herself to be the Ardra and that she is the devil to many civilisations. She transforms into the Klingon version of the devil, to prove herself, and produces documents for Jared to sign. These would transfer power to her now that the earlier contract’s timeframe has come to an end. 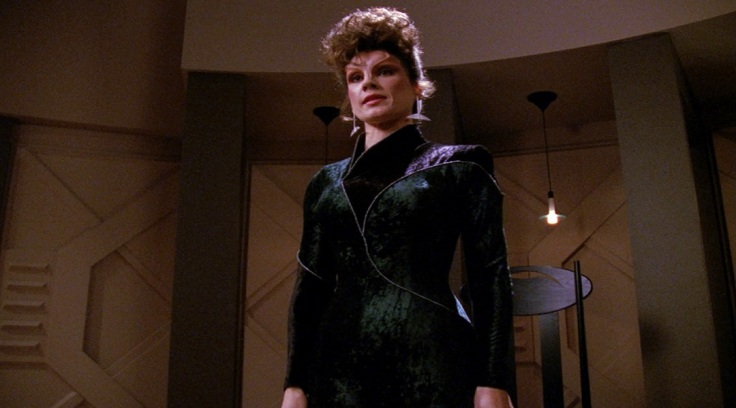 Jared is willing to do anything she says.

Picard, of course, is far more sceptical and demands to see these documents. He asks Data to go over the contract and the team return to the Enterprise. Picard is convinced that the Ardra is suspicious and reminds everyone that fear can be a powerful motivator (linking back to the scenes on the holodeck at the start of the episode) and the team go on to discuss that everything they’ve seen the Ardra do could be replicated with technology and they even contemplate that she could be another Q-like figure hellbent on causing mischief.

Picard returns to the bridge to find the Ardra sitting in his chair, claiming the ship now belongs to her. The cheek of it! A woman at the helm of the Enterprise?

Attempts to remove her by force, at first by using Worf to eject her from the bridge and then by beaming her away, fail and she remains on board much to Picard’s frustration. He hopes to stall the Ardra so that his team can confirm his suspicions. Data tells Picard that the documents are legit and the Ardra is thrilled, once again claiming the Enterprise as her own before vanishing.

Picard asks Data to go over the contract to see if there is a legal loophole to get the Ventaxians out of the contract. He then sends Worf and Riker to see if they can find a power source for any possible technology she could be using. He also sends Geordi La Forge along with Doctor Clark back to the planet to investigate the earthquake-like tremors.

Much later that night…

The Ardra appears in Picard’s personal quarters wearing a revealing outfit. She attempts to seduce him but is dismissed as he calls her “…obvious and vulgar.” Seriously, Kirk and Riker would have been all over her by this point. Our man Picard is made of sterner stuff! The Ardra changes her outfit into something more classy and then out of frustration transforms to look like Troi. Once again, Picard rebuffs her advances. Furious, she beams him down to the planet’s surface.  He is still wearing his bedclothes (and we’re very glad he doesn’t sleep naked)!  The transporter beam breaks and it looks like he is unable to return.

Thankfully Data, in a shuttle and with a spare uniform, heads out and rescues Picard. Heading back towards the Enterprise, they are shocked to see the starship disappear before their eyes. Returning to the scientific outpost, they check various equipment but can’t find any sign of the Enterprise. Geordi is convinced that if they can make the Ardra show off her powers some more he will be able to track the energy signals and prove she is using tech after all. Will Picard be proved right?

At this point, the Ardra appears back in the outpost and Picard demands arbitration. He insists she is not the legendary Arbra and offers her various incentives to accept his challenge. The Ardra says that she will let this take place but demands Picard, heart and soul and body, when she wins.  He reluctantly agrees and the Ardra names Data as Arbitrator since he is emotionless and will act without bias. Data is not keen but Picard is insistent.

Jared is questioned about the nature of the contract.

There is some to-and-fro as he discusses the legend/history of the Arbra and his people. Picard points out that the Ardra didn’t actually do anything once the contract was signed; the Ventaxians themselves took care of everything and are the ones who changed their civilisation and society for the better.

During all this talk, the Ardra has been using her powers and showing off a little to prove she is the legend she claims to be. However, La Forge enters the makeshift courtroom and Picard asks for a brief recess. Geordi tells him that, thanks to the Ardra performing some ‘magic’, he was able to triangulate her power source and has discovered a ship in orbit. The Ardra’s ship is cloaked and has extended that to cover the Enterprise too, including cutting off communications, hence it seeming to have vanished. Geordi has breached both the cloak and the communications block and has been in touch with the crew of the Enterprise.

Picard returns to the courtroom and shows that he can steal the Ardra’s powers. He makes the disappear momentarily, makes the ground tremble and transforms into the Klingon Devil. She can do nothing to stop any of this and her frustration and fear show themselves. Picard then reveals that his team have used the technology from her own ship to perform this ‘magic’ and so he can now prove this so-called Ardra is actually nothing more than a very daring con artist who read up on the Ardra legend and is trying to go for the big one… stealing an entire planet for herself!

She is arrested and the contract declared invalid. The Ventaxians can return to their peaceful ways and she is led away. Before she goes, she turns to Picard and tells him that they would have had fun and laughs, leaving with the words “Until we meet again”.

Seeing Data acting as judge is amusing because his deadpan delivery is perfectly timed. Picard’s frustration and anger at the Ardra, especially when he is beamed down to the planet in just his bedclothes, is great and Patrick Stewart really works that face of his. I need a t-shirt with “I find you obvious and vulgar” emblazoned across it!

We at TBG always found it a shame that the Ardra didn’t return; her scenes with Picard were really strong and it would have good to have seen her face the team again. It was clever how the tech she used was simply stolen from the Romulans and controlled by eye movement; it allowed her to perform ‘magic’ without any visible equipment. Judge Data was great fun, even if the legal language was very 20th Century America, and it amused us to see him chastise Picard once or twice.

Counsellor Troi, once again, proved a bit useless in this episode. Sure, the Ventaxians were feeling panicked but their world was going to end so that much was bleedin’ obvious. Also, other than some last-minute work by Geordi, this was very much another episode where Picard and Data did all the heavy lifting. That’s fine, of course, and it was always difficult to fit the entire team into every show, but we all want more Riker (all the time, all the Riker) so it would have been fun to see him interact with the seductive Ardra a little more. I could devote an article to Riker’s facial hair but this isn’t the place for that…

The early scene of Data acting the role of Scrooge was fun. It’s a shame that was all we got, but it was nice that they brought the conversation about fear back around to that earlier scene later on in the episode. Of course, we all know that Sir Pat went on to play Scrooge himself. Both on stage and on film, he made a great Ebenezer. Having him discuss the role, and the art of acting, here was quite neat and almost felt like a peek behind the curtain.

So, although not a Christmas episode (being broadcast in February 1991) this is worth checking out if you have 45 minutes to spare!