I’m starting with the man in the mirror.

We are back once again with the renegade masters known as Ratalaika Games, this time we are taking a look at the recently released puzzler, Reflection of Mine. Once again the fiendish fancies at Ratalaika have provided us with an experience that as a concept, is simple to pick up and play for gamers on the go but tricky to master, but is this outing a sight to behold or does it cast a poor reflection? Let’s take a look!

Reflection of Mine is a puzzler centred around some pretty dark and creepy themes, to be honest, as the game and story roll on the subject matter that focuses heavily on duel personalities, depression and anxiety is given life by some interesting writing and striking artwork. Though I found the delivery to be a bit heavy-handed in places the general tones were presented effectively and whether or not you will enjoy the story or just focus on playing the puzzles to get through the game will depend entirely on how you relate to the subject matter but for this reviewer, I enjoy that developers are trying to open up the conversation of mental illness within games as it is a topic that is hard to be explained but visual aids certainly help. So with that being said, let’s take a closer look at the gameplay. 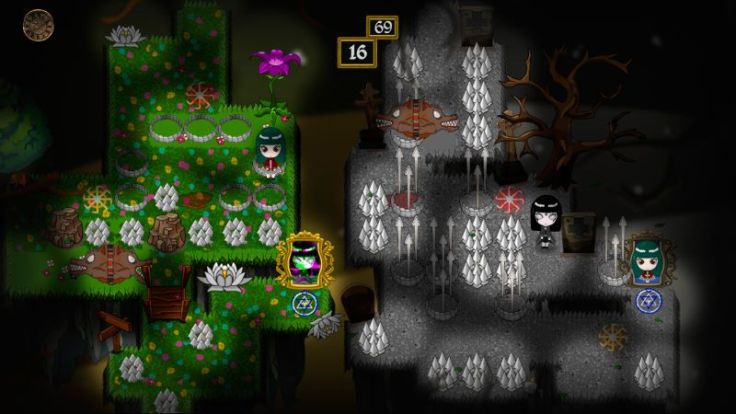 You take control of a young girl named Lilly Witchgan and begin by speaking to your psychiatrist, during this brief conversation t is clear that Lilly has suffered memory loss as she struggles to recall the events of some terrible moments from her past. Before long Lilly is struggling against a voice in her head and descends into her fractured mind to find answers to her past and with a little luck, find herself too!

What comes next is a series of puzzles spread across four themed worlds, where you must control two versions of Lilly simultaneously on semi mirrored levels. On one side you will have a colourful, almost idealistic version of Lilly and on the other a much darker, bleak representation. The goal is to navigate both characters to the end of the level which is represented by a mirror but this is easier said than done as numerous hazards, enemies and traps await you. As mentioned, you control each character simultaneously, this is done with the left stick, meaning that if you are focusing on the left Lilly and move her one space up, the right Lilly will move also move one space up. Although the levels are mirrored in size and shape, the pathway, hazards and enemies within each will differ somewhat so you will have to take extra care, walking Lilly into a barrier such as a log or rock will stop her from moving but if that barrier is not in the same place on the other side then that Lilly will continue to move, potentially into danger.

Reflection of Mine eases you in gentle with a couple of tutorial levels to help you get to grips with things but it won’t be long before you are traversing nightmarish levels riddled with spike traps, monsters and all manner of dangers so the balancing act of keeping an eye on each side of the screen and planning your route to be two steps ahead of what is happening on-screen is enough to give a chess players mentality a workout.  Fortunately, there are a few assists to help you along your way, the first of which is a checkpoint system, a symbol will appear on the floor usually about halfway through both versions of each level, get both Lilly’s to stand on this and you can activate a checkpoint for that level so f you die, you won’t have to start all over again. Another comes in the form of a guide, you can activate this to lead you in the right direction of you have died several times on a level meaning you will not be forever stuck. This handholding is optional of course but a welcomed inclusion as the game is extremely inventive in its level design and will have you scratching your head several times before the first world is finished.

If you crave a serious challenge there are three difficulty settings to choose from, Phobia (Easy) Hysteria (Medium) and an unlockable third mode Neurosis (Hard) plus an arcade mode and for perfectionists, each level has a target amount of steps with which to complete them in, though fortunately, it is not game over if you go over this amount…. for which I was very thankful! In between levels, the story is played out with a selection of diary entries, some of which are really well voiced. There are also small exploration sections where you guide Lilly through her memories and see them from various aspects of her personality, of which there are ten different variants, which at first felt a bit tacked on but as I played more I found myself enjoying these sections as they granted a brief reprieve after getting through a bunch of challenging levels and gave my brain chance to cool off.

One thing that really stood out was the art style and music.

The opening menu screen had music that was a mix between a heartbeat monitor and a music box which gave an instantly haunting feel that got my attention, upon starting the game the music changed into something faster paced but still creepy yet catchy as if Danny Elfman had been letting his creative juices flow through the development. The music was of course complemented by the graphical style which can only be described as if Tim Burton had animated a music video for The Birthday Massacre, which all came together to provide a sense of through the looking glass to the experience that I really enjoyed. The game itself performed really well on Switch, say what you want about Ratalaika Games, they have found their groove with publishing lots of throwback style titles and although some are better than others, the retro set-up lends itself for quick loading times and short burst gameplay with little in the way of bugs or glitches.

Reflection of Mine is a very engaging puzzle experience that for the most part achieves what it sets out to do, as mentioned, the subject matter may not appeal to some players for various reasons and that is understandable. Personally, I enjoyed what the developers attempted here but more importantly, I enjoyed the puzzles. Don’t let the morbidly cute artwork fool you, this is a very challenging game and one that belongs in the collection of any puzzle fan with hours of content and various difficulties to work through and it won’t cost the earth to give it a try, this one is currently sitting pretty at a generous £7.99/$7.99