Dark Screen Games in partnership with publisher Merge Games release Bounty Battle on Nintendo Switch, Xbox, PlayStation and PC. Bringing together a roster of iconic indie game characters for, what is described as, the ultimate 2D contest of champions. With an interesting concept will Bounty Battle be the next Smash Bros. Ultimate or resigned to be another PlayStation All-Stars Battle Royale?

Bounty Battle features an impressive roster of fighters pulled from indie hits including Guacamelee!, Darkest Dungeon, Dead Cells, Axiom Verge, Owlboy and many more. Each fighter has their own unique style, move sets and accompanying companion to help during battle. Although, as you’d expect, several of the characters playstyles fall into stereotypical categories, from slow-paced powerhouses to speedy light hitting brawlers.

Game modes include the usual suspects, tournament, training, tutorial and multiplayer. Tournament mode sets you against a number of scenarios to overcome in order to unlock rewards and the opportunity to repeat the process over with a different character. If playing solo this mode will consume the majority of your playtime. The process to unlock all of the items, limited to new costumes, is quite a drag and claiming bounties didn’t have the desired impact. Training and tutorial modes speak for themselves, rounding off a pretty barebones experience when compared to other modern offerings of a similar ilk. There isn’t a lot in the way of variety here and each round only begins when you hit the start button, a strange decision and one that caught me out all too often thinking the game had crashed. 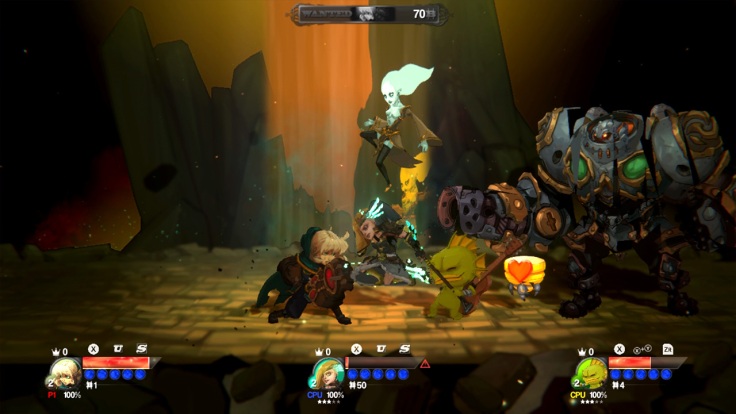 Where Bounty Battle places a massive emphasis is in the multiplayer element, so much so the main menu boots into the verses tab automatically. In doing this, the developers have made it the centrepiece of the clunky menu system which is rather bittersweet as there is no online mode, only local play. Playing against friends is always fun, especially for bragging rights and at least you won’t need to fork out on two copies of the game. Retailing at $24.99/£19.99 it isn’t the cheapest fighter out there and the computer A.I. is like trying to take down a Terminator at John Connor’s birthday party – playing against them can be life-sucking.

A faithful recreation of our favourite indies

Visually Bounty Battle succeeds in faithfully recreating the vast roster of characters gifted by their creators to a high level of polish and appreciation. Each and every model looks instantly recognisable but with Dark Screen Games makeover. Far too often we have seen cross over releases where our favourite gaming icons look like they have just escaped from Picasso’s studio, we’re looking at you Capcom. Battles are won and lost across ten different stages which offer slight variation in the gameplay. The backdrops can be a touch on the dull side which gives the game a dark and bland feeling overall, which is ironic coming from Dark Screen Games. It really is a shame because the opening animation is beautifully drawn and leaves you excited to step into battle. Honestly, the minute or so intro is the best part of the game.

Performance on the Nintendo Switch leaves a lot to be desired. What should be a slick, fast and adrenaline-filled experience is replaced with framerate stutters and underwhelming controls. You have a light and heavy attack, jump and special all of which can be modified by adding a press of the analogue stick in a different direction. While this is a tried and tested system it just doesn’t work for Bounty Battle. Many of the button presses feel sluggish in their response and more luck than skill is involved in winning at times. The soundtrack is forgettable, adding nothing to the atmosphere and intensity of the fight, and accompanied by a standard set of sound effects.

Reading the developers blurb about Bounty Battle conjures up the belief you are about to partake in an epic showdown between indies hottest contestants. What we actually get is a lukewarm fighter with messy controls, bland gameplay modes and a forgettable soundtrack. It must have taken the developers a lot of time and effort to get all of the licenced characters into Bounty Battle which is why it is so disappointing that the final package feels broken and incomplete. Bounty Battle showed promise and with a few tweaks could come out fighting but in its current state isn’t fun to play, even with friends.