I’m a big fan of Thy Sword and thus an Amiga fan.

Clan N feels like a spiritual successor in the way it looks and feels and I love it. Those new to both games can enjoy a simplified yet elegant sprite art style with painting-like landscapes. Choose one of four characters and begin our journey across seven levels filled with emerging ninjas, mid-bosses, and large end-level BOSS BATTLES that take the cake.

First I must mention that stunning art style that will draw folks in to play. Our characters, as well as similar size enemies, have a build that seems simple but designed well enough to articulate their body style, clothing and weapons very well. Every animal and small object from bunnies, to turkey legs, can be identified easily. The slightly moving trees and bushes set the scene, while each area progressed will lead to wonderful landscapes that resemble a painting more than a video game. Some scenes will have a cinematic opening with the top and bottom of the screen blacked out to focus on what’s being shown, to then open and let the action continue. Music remains the same for each level but meshes the art style in a lovely manner. I get used to the tunes and it melts into the background while I hack and slash my way to the end.

Parry oncoming attacks and work on timing as you’re surrounded by five or more enemies at a time. It’s not simply a hack and slash game as the timing does matter and you can be taken down swiftly when overrun in battle. Quick and heavy attacks can be used in sequence to form a combo and launch baddies into the air. Jump and attack to rain damage on enemies in a way that reminds me of TMNT on NES, love that move. I stuck with the ninja Akira as my character and stuck with him the entire way. His special drops a lightning bolt from the sky and destroys surrounding enemies in a lovely way. I returned to my campaign with the old man Tarou and did not enjoy his move set and returned to Akira, but I’m thinking if you stick with any character from the beginning you can level them up and it will be fine. 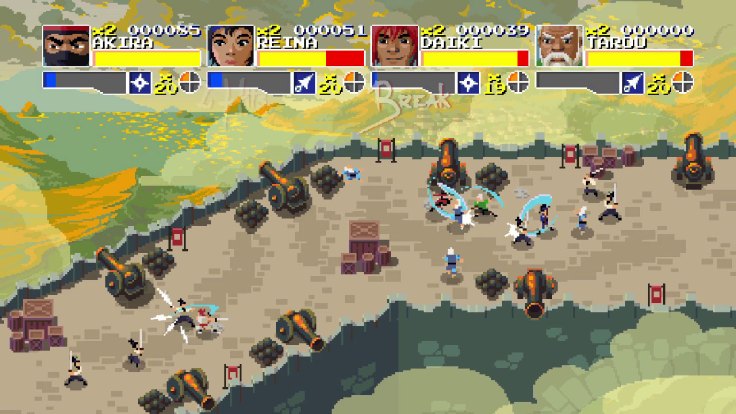 Each time your character has levelled up, keep an eye out for the shop to upgrade speed, strength, endurance, special, and charge. I opted to increase my attack fully before moving on elsewhere. There you can also find potions, ninja stars, and extra lives I never spent any points on them. Turkey legs and full-blown turkey meals will be dropped by fallen enemies and can be collected for immediate use, not to be saved later. That would have been a great option but I can see why it wasn’t allowed. Infinite continues is a literal lifesaver as I don’t think I could manage the entire game without them.

Mini-games are used to break up the slightly overdrawn levels.

The first of which calls for the player to avoid boulders on a 6×6 marked area. Every so often boulders will be launched at your character and the task is to avoid them. Time taken between boulder rounds will lesson until completion. This is the first mini-game that must be completed in-game to then be unlocked on the main menu. As I said, I don’t think this adds to the fun I’ve been having and does not feel natural. Each of the seven levels can feel like they overstay their welcome a bit additionally. Towards level five I would call out, “okay it’s about time to fight the boss” only to be greeted by that boss four screens later. 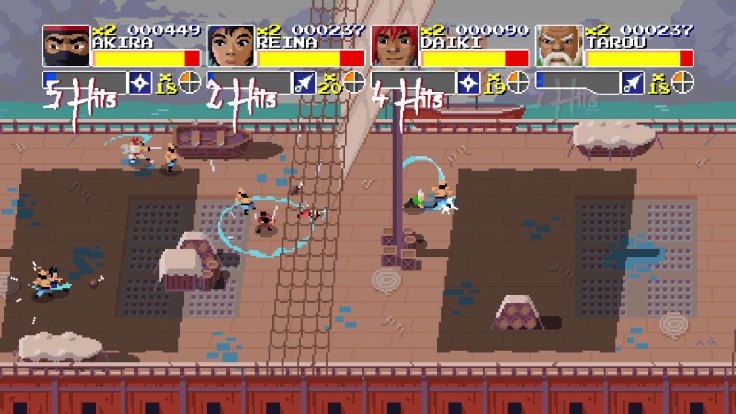 Orange suited ninjas specialise in distance attacks and can be very intrusive for fights that have more than four enemies. “Mickey Ninjas” as I like to call them, spin at you in fury and will surely end your run when two or more attack at once. Horse riding baddies call for the player to kill the horse before getting to the rider, all while being attacked before the animal has fallen. This variety spread across the game matches boss fights as well, making a meaty portion of the game I looked forward to each level. All bosses tower over our character and each feels different from the last. A large spider that has an army of babies, a fire breathing dragon that flies across the screen shooting flames. Each is unique and has a different fighting experience.

Lastly, I must mention the major issues I had with the game that ended my runs while playing. I streamed Clan N and was ecstatic for the entire duration. The next day I opened the game and it crashed four times. I reset my Switch, checked for an update on the console, and even tested a different game. It did not fix the issue. Creamative then issued a patch, which to knowledge, adjusted the game over situation. That would result in bringing the player to the main screen as opposed to restarting from that point with a game over message, which I preferred. This may bring the option to change characters but I’m unsure if that would result in using a character that does not have the upgrades already chosen. Now thinking the patch resolved the issue, I streamed the game again but only to be met with the same crashing issue. This makes the game unplayable and as a result, can only yield the lowest score possible. I’m sad to give the game that score because I loved it before these gaming killing issues.

A number of times in my play I said “this game is great” and this review should reflect that. It’s saddening to give Clan N the lowest score possible because this great team of three created a game that otherwise, I would give an 8.5. Unless another patch is issued, the game will remain at this score. I hope they fix the game killing crash and we can change our review. Until then, the game gets a 0.