In the 90s, Nokia introduced the world to the decades-old concept of Snake. On brick-like cell phones, people navigated a “snake” around a pixelated screen to eat and grow without running into itself like it was in Gemini Man. Since then the game has evolved and inspired new games to blossom. One such game is Snakeybus.

Snakeybus puts you in the seat of a bus driver, picking up passengers and taking them to drop off points. As you navigate to pick people up, the bus may become too packed, begging you to go to the drop off point before letting anyone else onboard. Once you drop everyone off, the bus gets longer and longer and longer. The goal is to survive as long as possible while dropping off as many people as you can. You are even gifted the lifeline of jumping when you find yourself face to face with the side of a bus. Well, the side of yourself. 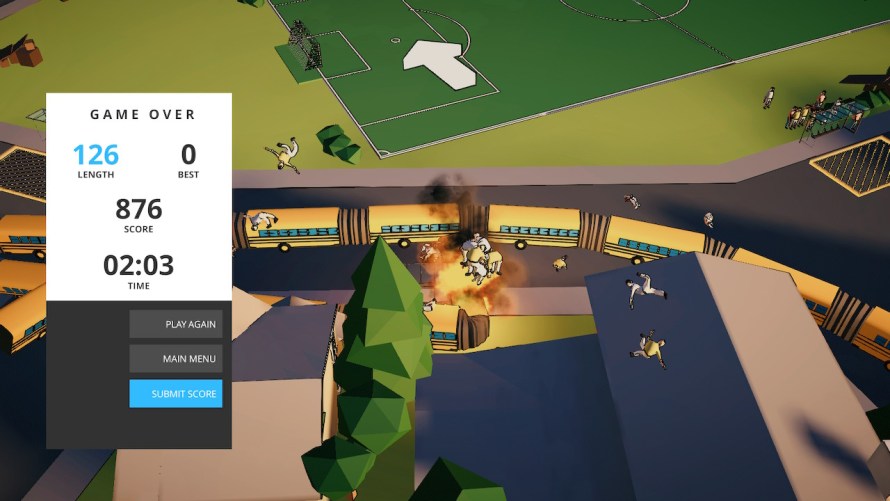 Avoid completing the ouroboros for so long and you’re awarded a score.

This can be submitted into the leaderboards and seamlessly used to open up new areas and unlock different vehicles. Amongst them are a school bus, a rainbow party bus and a dragon with a steering wheel in its mouth. Areas include Paris, Seattle, lots of hot wheels inspired tracks and more. Each time you play the points accumulate, automatically unlocking things as you hit milestones.

You can brake and accelerate around the maps, but most importantly you can jump once in a while to avoid colliding into yourself. There are a few game modes, including one where you have to jump and stay afloat in order to survive. There’s a nice range of challenges as you chug along. Gameplay times are usually only a few minutes at a time, so it’s fun to switch up game modes every few attempts.

The music is a highlight in the game. A few artists contributed to the soundtrack, including Josiah Wu, Andrew Landry and Eric Moen. Songs flipped on each retry or playthrough, balancing the quick gameplay with mellow compositions to keep you calm and collected.

A spin on a classic, Snakeybus is a fast-paced 3D Snake-like set to a lo-fi hip-hop beat providing a sturdy soundtrack. It’s a fun way to spend time with levels lasting only a few minutes at a time. I ended up on a few leaderboards in the time I spent with Snakeybus. See if you can beat me.