Lord Shmup back at it again with Sisters Royale: Five Sisters Under Fire! This shmup was developed by Alfa Systems and was previously locked to the Japan eShop, but that changed on January 30th, 2020. I was very excited to get this game for review so big thanks to Chorus Worldwide Games.

Immediately diving into the story prior to the main title screen, it tells of five sisters that do not get along. One day they came together for a common concern, a man. They will fight over this man to win him over instead of helping the people that need them. Love, am I right? The main screen showing brightly coloured objects and the vibe of happiness is a preview for what’s to come. The music is hype and comparable to the joyful title music in Mario Kart racing. very nice. Place your Switch in the flip grip, hit the options to turn it vertical and let’s get started.

Choose from one of the five sisters, each with their own attack and special combinations. Three difficulty options to select from then the game begins. As your chosen fighter, you’re tasked with fighting the other four sisters to win over the man of your dreams, Yashini. I opted for Selma with the classic spread shot but with enough plays came back and tried each character. Ece might be my favourite of the five because of her nice summoning attack. 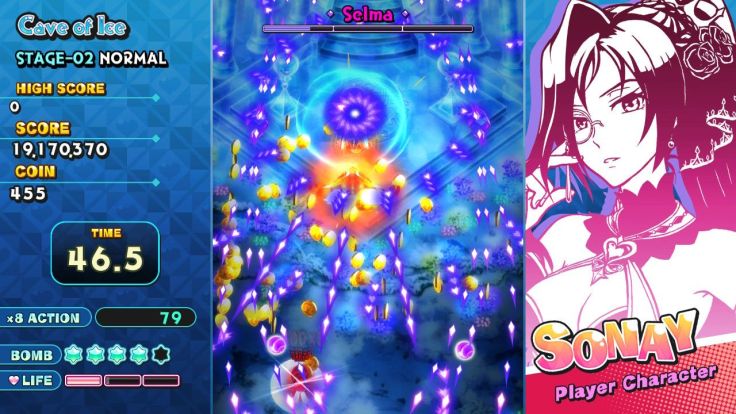 Colourful enemies and backgrounds are positive and inviting

Sisters Royale has a top-down view with 3D characters, setting it apart from most shmups I’ve played as of late. For retro heads, it has a slight familiarity to Pocky and Rocky the way your character walks as apposed to most shmups being a ship. Terrain having an effect on your character is so new and different! Ice patches will cause your fighter to slide in the direction you’ve had momentum in. At first, it caused me to die but it was a joyful discovery. Windmills will push the fighter in any direction they face. I liked these distractions to give an added sense of difficulty.

Baddies will release coins once defeated and will be auto-collected for your score. Each hit taken will relinquish coins saved and you’ll have to frantically gather them amidst the chaos brewing around your fighter. In the event you die, the game will start a 3-2-1 counter to when you will begin again. This should be the new standard for shmups and I applaud Alfa Systems for implementing the helpful tool. It allows the player to gather themselves and dive back in. Just as well, the countdown is in place for pausing the game.

Reading the banter between the sisters is humorous, with lots of name-calling. It’s entertaining, to say the least, and welcomed in between levels.

Another idea every shmup should get on board with that Alfa Systems has done right, getting closer to the danger is fruitful. Shoot enemies from afar and you will gain points, but shoot nearer to boost that score. Pushing the player to not be afraid of enemy fire makes the game more interesting by taking chances.

Bullet patterns are refreshing and new

Upgrade your difficulty to see increasingly different and difficulty in enemy fire. I loved that some bullets would boomerang back towards your fighter. At first I didn’t notice it and got caught off guard and I invite that type of challenge, all the more fun.

Music is fast, quirky, and upbeat while fitting perfectly with the gameplay. Unlimited continues will keep the player going but as always it resets your score. If you’re having a difficult time just bump it down to easy or practice mode. I’m not sure why, but there is a timer at the top of the screen. I never ran into a problem with running out of time and if a continue is used the timer restarts.

What a wonderful shmup that is fun, even on easy mode. Global leaderboards are available per difficulty, and per character giving plenty of chances to shoot up the list while boasting high replayability. Five different characters cater to different play styles and the humour that follows is worth a chuckle. I loved Sisters Royale and thanks again to Chorus Worldwide Games.