Like sports? There’s an anime for you. You can watch Eyeshield 21 (football), Yowamushi Pedal (bicycle racing), Kuroko’s Basketball, The Prince of Tennis, Ace of Diamond  (baseball), Free! (swimming), Yuri!!! On Ice (figure skating), All Out!! (rugby), Price of Stride (parkour-ish foot racing), and many, many more for just about any sport you can think of.

But Haikyū!! is the best of them all.

In case you haven’t watched it (or read the manga), Haikyū!! centres on Shoyo Hinata, a short, ginger boy who dreams of playing in the volleyball national championship just like his hero, an equally short yet superstar player known as the “Little Giant.” Hinata joins the volleyball club at Karasuno High and immediately butts heads with Tobio Kageyama, a prodigy setter and Hinata’s bitter rival from middle school. But the club senpais won’t tolerate in-fighting on the team – not when they need to make it to the national championship to restore Karasuno High to its former powerhouse status.

Haikyu!! is the best sports anime out there, maybe even the best anime of all time. And I’m here to tell you why.

You could argue that one does not watch anime for realism, and you would be right. But my main problem with sports anime is that too many of them start with a preternaturally gifted individual who then steps on the field/court/track and is immediately amazing despite never having played the sport before.

That just doesn’t happen. Even Usain Bolt trained his keister off.

Enter Hinata. Despite his short stature, he has incredible jumping abilities, so that’s not a total departure from the format. Yet when he first joins the team, he’s not instantly a volleyball god. At first, Hinata sucks. He has to work hard to keep up with the rest of the team, and the story doesn’t skimp on that aspect. As his skills gradually improve, his success feels earned rather than simply dropped in his lap by a benevolent mangaka.

Haikyu!! also sticks to the realistic route when it comes to Karasuno’s opponents. Ordinarily, you know the drill – the protagonist faces a strong enemy, defeats them, faces a stronger enemy, defeats them, faces an even stronger enemy, and on into infinity. Before too long, the ability levels of the opponents are so incredible that they’re completely off the charts of anything an actual human could do.

Haikyu!! increases the stakes for Karasuno by providing increasingly stronger opponents but in a more subtle way. The challenges are like a chess match; Karasuno must figure out how to beat the opposing team’s style of play in order to be successful. Brute strength and super-powered DNA aren’t the answer here, but rather practice, patience, and teamwork.

Most sports anime preach such a message. Haikyū!! actually shows it.

2. It’s Made by People Who Clearly Love Volleyball

Taking a ball to the face. The disorienting feeling of trying to receive a floater serve. The ball that comes right at your chest, and you can’t decide whether to pass it overhand or underhand. Accidentally hitting your teammate on the back of the head with your serve.

These are moments that are intimately familiar to anyone who’s played enough volleyball. And all these moments are in Haikyū!!.

They didn’t just settle for the broad strokes of the sport, a.k.a. pass, set, hit. They took the time to get the little details right – not just the physical details, but the emotional details as well.

Bang your chin on the floor while diving? All the volleyball players in the audience are nodding. We know. And we’re glad someone cared enough to notice.

3. The Down Times are Just as Important as the Up Times

We all know the protagonist has to lose sometimes. It’s part of their character arc and makes for a better story. But too often in sports anime (or anime in general), the losses are glossed over. The protagonist will feel utter anguish and give many speeches about “getting stronger,” but within an episode or two, the anime is back to business as usual.

I understand the reasons for this. No one likes to lose, so why drag it out? Why not get right back to what people love about your show?

Because unless we truly feel those gut-wrenching losses, the wins mean nothing. Haikyu!! understands this.

I don’t think it’s a spoiler to say that Karasuno doesn’t win all their matches. In fact, they face many teams that are better than they are, and they don’t always come out on top. But Haikyū!! doesn’t shy away from these moments. It embraces them, for weeks sometimes. There’s a point, in fact, where you start to wonder if it’s ever going to get better.

And then it does, and it’s all the more satisfying because of it. 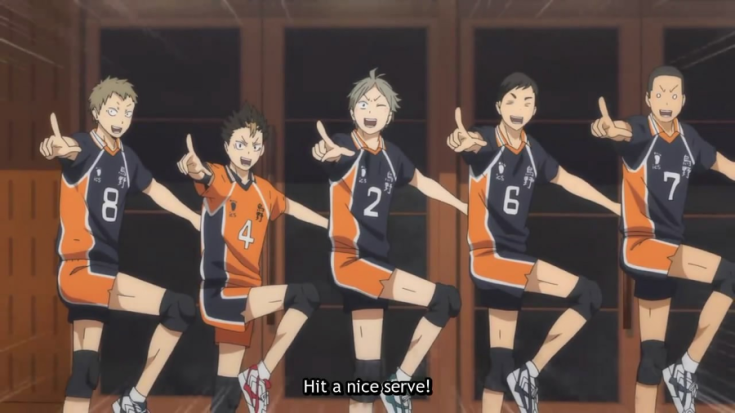 4. The Characters are the Best

Haikyū!! may have founded itself on the relationship between Hinata and Kageyama, but after a dozen episodes or so, it becomes increasingly difficult to point out who the main characters are. This is because the story gives each of its multitude of side characters a chance to shine, and most of them vie to steal the show.

Besides Hinata and Kageyama, there’s Ryu, Daichi, Asahi, Sugawara, Tsukki, Noya, and the rest of the Karasuno Crows. There’s Coach Ukai, managers Kiyoko and Hitoka, and Takeda Sensei, the team advisor. There’s also the opposing teams Aoba Johsai, Nekoma, Date Tech, and many others, each filled with their own individual players, coaches, managers, and cheers (say it with me ‘cuz I know it’s stuck in your head too: “Go, go, go, go, go, Seijoh!”).

The characters feel real and knowable rather than having that over-the-top, caricature quality favoured by some sports anime. You’ll notice very little “anime hair” in Haikyū!!. Instead, each of these characters stands out based on the merits of their personalities, and considering how many characters are in Haikyu!!, that’s really saying something.

Sometimes we love the anime we do for no reason that can be logically explained, and my intention is in no way to belittle anyone’s beloved sports anime. I mean, they wouldn’t have a billion episodes each if they weren’t great!

But in my super-humble-but-still-totally-correct opinion, Haikyū!! embraces the conventions of the genre in a way that raises it above other sports anime. It is the best sports anime ever…and maybe, just maybe, the best anime of all time.

If you haven’t seen it yet, Haikyū!! streams on Crunchyroll and Hulu. Currently, there are 60 episodes — perfect for a good binge. So grab some popcorn and some pom-poms, and shout it with me:

3 thoughts on “Haikyū!! – 4 Reasons Why it’s the Best Sports Anime of All Time”