Lust for Darkness is a twisted and saucy stroll into the world of erotica and skullbuggery… I mean Duggery. Ported to the Nintendo Switch from the wizards at SimFabric, does this first-person psychological horror offer enough to penetrate the increasingly crowded indie horror genre or is it a floppy performance? Let’s take a look.

Lust for Darkness follows the story of Jonathan Moon, whose wife has been missing for some time yet he receives a letter from her bidding him come to find her in a mansion run by an erotically charged occult. Though not the most original premise it does enough to set up the game without trying to overcomplicate itself. After overcoming a subtle stealth section to sneak into the mansion you are tasked with not drawing attention to yourself while searching for your wife.

The majority of the experience will have you walking around and exploring but there are a few puzzles to solve though none of them will tax your mind to any degree as they generally consist of aligning patterns or collecting a set number of items to slot into the appropriate holes. Combat is absent though there will be a few moments where you will be chased, like the puzzles, these are minimal and very simple to overcome. 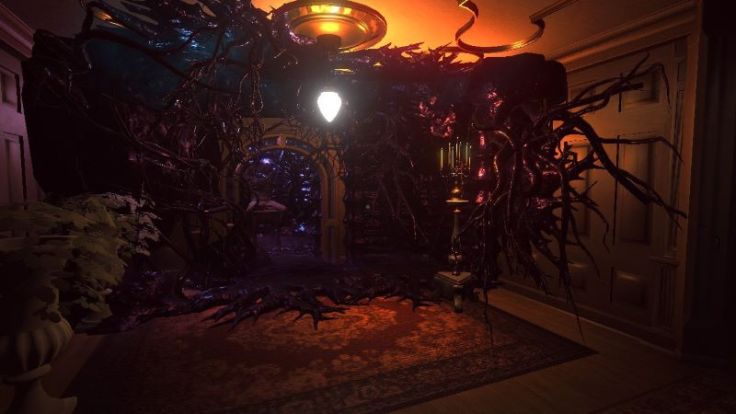 It won’t come as a shock that not everything is as it seems in this orgy obsessed mansion, more than a few cracks begin to show as what first appears to look like a Vatican weekend retreat soon takes a turn for the supernatural with some clear inspirational tones from Lovecraft, Giger and Barker. As the darker vibes of the story unfold you will be drawn through vaginal shaped portals into a creepy dimension known as Lusst’ghaa where the true oddities dwell. Though the scenery was foreboding in the design there was never any tension or sense of dread throughout the title. The odd attempt at a jump scare was thrown in from time to time but to no success and although you can die, the game blissfully restarts you at a very near checkpoint so you don’t get shafted into redoing an entire section.

Despite the large mansion and dark dimension, the exploration is pretty linear, your pathway is revealed by generally being through the only door in a hallway that opens and you will be spending a bit of time twisting a few knobs to find it. The story elements do a good job of keeping you on track and anyone who has played amnesia will feel right at home here as the emphasis on interacting with the environment is heavily pushed. Desks, Tools, Gadgets, Sex Toys and so on can all be examined to your heart’s content but the problem is, it’s a pointless exercise. 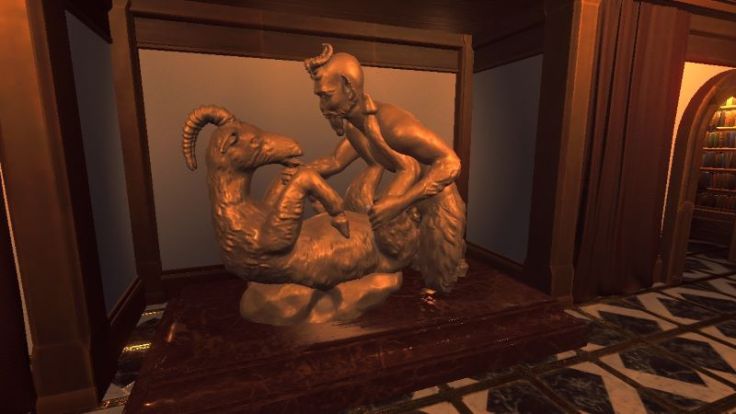 Unless you really want to examine an oversized rubber wang from every angle, look at a pencil sharpener more closely or contemplate why a necklace would need beads that large… about ninety percent of the items have no bearing on the story so I opted to ignore most as I progressed through save for a few collectables that are scattered about, once found they opened up some more detailed side stories in the main menu. There are a number of text documents to find and read and these did fill in a few gaps to the plot and build a bigger picture of the cult and their beliefs. Eavesdropping on conversation also reveals more of the wider events at play and the plot, though a bit heavy-handed and predictable in delivery was good enough to drive me on.

As the title would suggest, the emphasis on erotica is ever-present and it won’t be long before you are witnessing people having a bit of the old Humpty Dumpty and making use of the wide range of pleasure devices littering the mansion. Oddly enough this was handled pretty well from a mature title perspective and suited the tones of the occultist story, what did come across poorly was the use of strong language. The voice acting overall was fine but the use of the F word always felt forced and thrown in unnecessarily cheapening some of the dialogue.

The presentation was overall stylish and quite striking. A very polished opening cutscene set the scene with the rest of the story gets told through in-game graphics. Playing in both handheld and docked mode the performance was consistent. It was obvious certain concessions have been made as a close examination of characters and environments saw a lack of textures but clever use of lighting made sure general appearance remained sharp especially in darker areas.

Controls are simple, analogue sticks to move and look with A being used to interact. There was a bit of frame rate drop at times which was disappointing in such a linear slow-paced title but it didn’t ruin the overall experience. The music score was right on the money, some great sound effects and background music brought the mansion and alternate world to life and although it still didn’t manage to make the game scary it was at least a solid effort.

Lust for Darkness is an interesting idea that promises so much does an ok job but is over too quickly. Given the tones of the game, it may be done by design. This form of horror game has been popular for a while despite mixed results. Credit, where it’s due for going all out for a mature title that leaves little to the imagination, draws inspiration from the best places and spices things up for the switch but even with the relatively decent story, there is just no thrust behind it. With a bit more of a murder mystery vibe and some intricate puzzle-solving, it could have been a winner. If you are a fan of the genre then you will find enjoyment when the price is right but there are more fleshed out titles available.