If you’re wondering what the heck we’re rambling about, don’t fear for our sanity, we’re just excited because we’ve just got through watching our pre-ordered copy of the all-new Batman vs. Teenage Mutant Ninja Turtles movie on steel book Blu-ray.

Our favourite Caped Crusader has teamed up with a host of crazy characters over the years, including Scooby Doo, but perhaps the coolest co-op missions he’s ever had comes courtesy of director Jake Castorena and the radical source material written by James Tynion IV and Freddie Williams II.

The premise of Batman vs. TMNT is pretty simple. When all the unstable and experimental tech in Gotham begins to go missing, Batman must call upon the four sewer-dwelling ninjas from New York to help him bring down the culprits and restore order to the streets of his city. Along the way, the heroes must battle a who’s who of villains from Batman’s history, all of whom have been mutated by the very serum that brought Michelangelo, Raphael, Leonardo and Donatello to life in the first place. 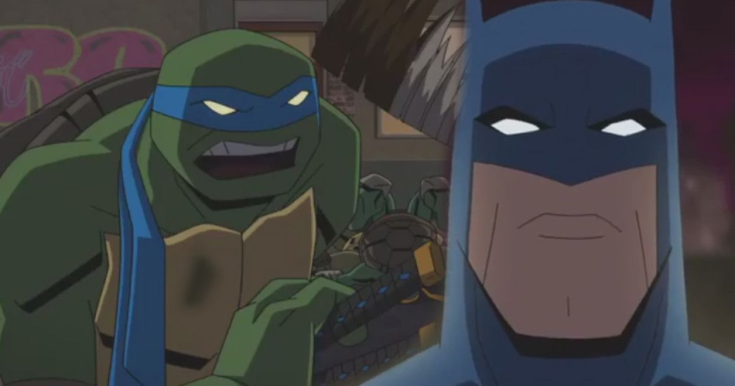 This is a fast-paced, action-packed animation that’s aimed at an older market than the recent Rise of the TMNT series. In fact, the villains here actually kill people, and it isn’t unusual to see Shredder murdering innocent bystanders with his vicious blades, or simply killing off his own henchmen because of their incompetence. This isn’t the same Oroku Saki you grew up with in the late 80s.

The animation style is a blend of the old school theatrics of Batman: The Animated Series, but with a modern twist. It’s certainly nice to look at, but perhaps more time could have been taken on Donatello, who quite honestly spends the entire movie looking like a green thumb. Other than that though, there are some cool designs, and exciting new looks for many of the familiar faces thanks to the whole ‘mutation storyline’ that runs throughout the plot.

Unlike many of DC’s output, Batman vs TMNT is actually very funny in places too. Yes, this is in large because of Michelangelo’s constant joking around, but it’s tonally not as dark as you’d expect from the often brooding Dark Knight, but also never slips into the realm of farce. In fact, over the last few years, DC has put out some really quality animated offerings and this is by far one of the very best and we can’t wait for the sequel where Batman squares off against the highly anticipated Joker Shredder.

There’s been a lot of build-up in anticipation of this latest DC release. This is the team-up fans have been crying out for and fans of both franchises will be more than happy with the end result.