I discovered the previous Swords and Soldiers game on the PlayStation 3 when it was free with the PlayStation Plus subscription back in January 2012. I ended up spending a lot of time playing the first game so was really looking forward to getting back into the world with this sequel.

Swords & Soldiers 2: Shawarmageddon plays out much the same as the first game. You have multiple lanes to manage and control the flow of enemies coming towards you and subsequently attacking your base. You have the added fun of building towers on each lane to further help in controlling the flow of enemies coming towards you. Towers can either be magic gathering or guard towers and there are only a limited amount of spots that these can be placed along the path.

To add variety there is also a robust resource management game within Swords & Soldiers 2. By utilising donkeys or worker units to mine gold and other precious resources that scatter along with the multitude of paths by your base. These important resources need to be collected so you can acquire new soldiers and spells along the way to help progression into the later stages. The enemy types are fantastically animated as are the backgrounds, a lot of time has been spent on the beauty of the backgrounds and the individual animations to create a smooth looking visual. 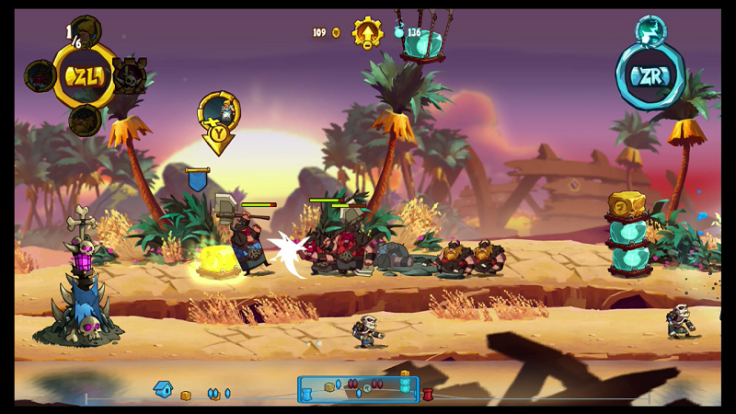 Gameplay is very simplistic but extremely fun, I spent an hour playing tonight without realising what the time was. I should be going to bed now as I have to go to work in the morning but I just wanted to get the writing and my thoughts down on paper. This game is a perfect time sink as the levels are split up into manageable chunks that don’t have to be played all at once. For me, it is perfect as a Nintendo Switch game as on a short bus journey you can easily pick through a single level.

For this review, I was playing on the PC so the game looked beautiful on my monitor but I imagine that it will look just as stunning on the Switch screen as well. The only negative I could bring to the forefront about the game is that the voice-acted lines aren’t great. They remind me of the early nineties cartoons voiced lines but if you go back to watch them now. That is really the only bad thing I have to say about the game though.

I know that this is only a short review but it’s a bite-sized game. Swords & Soldiers 2: Shawarmageddon is set at the correct price and on all the formats I have checked. It is around £12 which is a very fair price for the game that you are going to spend a lot of time with. My personal advice is to get this on the Nintendo Switch. It makes for a perfect short burst of entertainment on those commutes to work but also it works well as a long play game but that’s only if you want it to be.