With what has to be one of the greatest compliments I can offer to the recent Nintendo Switch release by TinyBuild, Party Hard has evidently taken inspiration from the Hitman and Hotline Miami games series’. Apparent from the outset, Party Hard shares a number of similarities with these two games, and therefore you can be forgiven for rushing straight to your Nintendo Switch console and making a purchase. As the late, great Thomas. A. Edison once said, “Ideas without execution are hallucinations,” so before you go and visit the Nintendo eStore, read on to determine whether this is a match made in heaven or one better left in the dark recesses of someone’s mind. 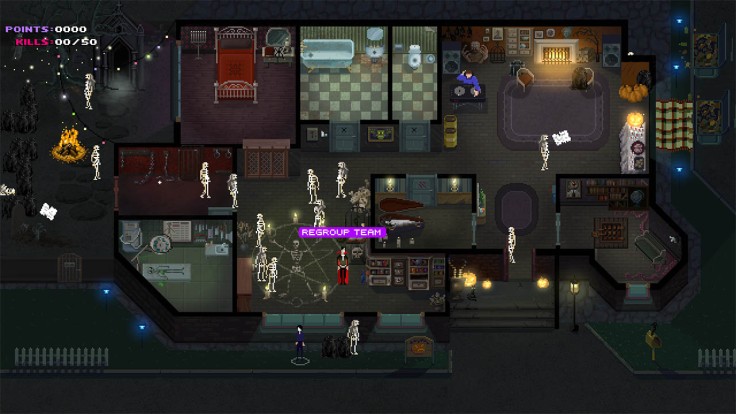 Developed by Pinokl Games and originally released on Windows in 2015, with subsequent releases on Xbox One and PS4 in 2016, Party Hard is best described as an action-stealth title. The storyline is a simple yet effective one: it is late at night and you need some sleep. Your neighbours are making too much noise and your task is to go and make them be quiet. What ensues is a psychotic rampage through 19 different parties, across a variety of locations within the USA, using the environment and a trusty knife to put an end to the sleepless nights. 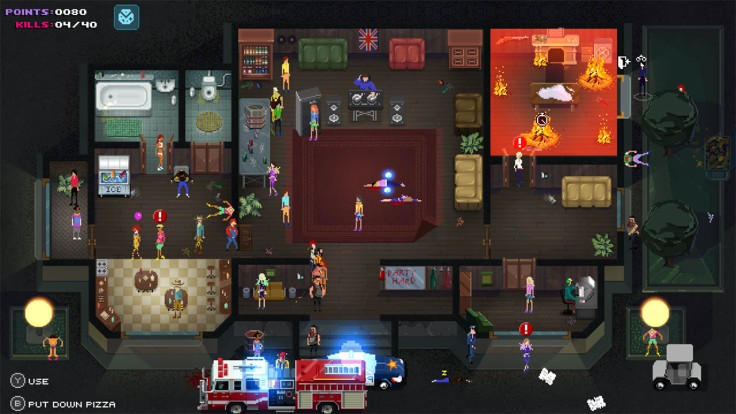 Each level begins with your arrival at a party which is in full swing. The party-goers are enjoying themselves, unaware that they are to meet their untimely demise before the night is out. Surveying the area, you are required to observe the movements of those inside and determine how best to start disposing of them. There is a plethora of options for you to choose from, and your successfulness will be determined by how well you execute them. Do you chop a tree down and let it fall through the window onto an unsuspecting guest? Do you poison the fruit punch? Set fire to a room? All of these choices and more are presented on-screen with a small silver sparkle, notifying you that there is an interaction available. Deciding on the best time to use each of these is key, as blowing up the DJ’s speaker with one person next to it is nowhere near as efficient as when there are ten. Your progress in the level is determined by how many deaths have occurred, and this is shown in the top left-hand corner of the screen.

Advertised as having semi-procedural environments in-game, each level has its own quirks which can become even more apparent when you die and have to restart. At this point, you may notice subtle changes to the layout of the rooms, the positioning of the interactables and what occurs as the party progresses. For example, one attempt saw the SWAT team arrive early doors to make an arrest, which resulted in eight unsuspecting victims being taken away. This affected the Kill Count and meant I was at an advantage as soon as the level began. On another occasion, one of the NPCs killed a fellow partygoer, for reasons unknown, and left me with one less to worry about. These were elements of the game that I thoroughly enjoyed, and it kept it fresh and engaging. For all its inventiveness, it was however frustrating at times as I had identified patterns to peoples movements and behaviours, only for this to become null and void upon starting again. And start again I did! 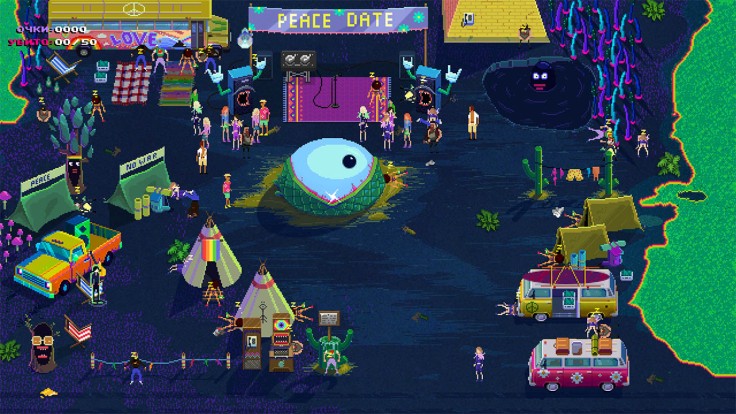 Learning the ropes in the opening level was a challenge, with little in the way of guidance. There is no fully-fledged tutorial to speak of, and whilst I can see the merit of this, it did test my patience. I was regularly being caught without any clear reason as to why, and it was only through learning the game mechanics did I start to pick up on why this was happening. There are a number of ways that you can fail the level, from the police being called by an NPC because they have witnessed a murder, to others accusing you of murder upon the police’ arrival, and this is where the element of strategy is most present. With upwards of fifty partygoers to “remove”, finding opportunities to do so can be particularly tricky. Because of this, the levels themselves can take quite some time. The first level I completed after approximately ten attempts, whereas the second I completed on my first attempt, albeit that took me thirty minutes. 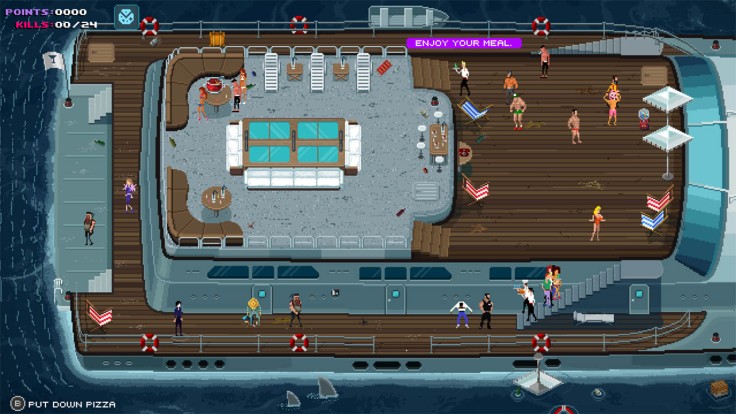 Evident from the screenshots shared throughout this review, the graphics are superb. They are clean, crisp and pixelated, just the way I like games of this nature. I love the finer details included in each setting and it helps to provide a unique experience in each level. The character models provide personality, and when coupled with the way they interact with the environment and move around on-screen, it only serves to enhance the focus on strategy. For example, the bouncers, dressed in black and flexing muscles, felt like more of an immediate threat to me and I knew I had to dispose of them as quickly as possible. The soundtrack is equally as fitting to the gameplay, with techno synth beats akin to Hotline Miami providing a sense of urgency.

It is excellent to see developers thinking of ingenious ways to provide fresh and exciting gaming experiences. Personally, this one is particularly clever and inventive. I think there are elements that could have been improved, with the AI being the most notable thought for a number of reasons. I found that there were occasions were the NPCs didn’t move from their spot for the entirety of the party, which is highly unusual. Equally, there were times where NPCs were moving around in a manner I would describe as nothing short of aimless. Standing alone next to an oven in the kitchen or moving between rooms with no obvious objective made it feel scripted, which is a shame. Party Hard 2 was released on Steam last month, and gameplay videos suggest some rather noticeable improvements have been made, so here’s to hoping it makes its way onto the Nintendo Switch soon!

With nineteen parties to crash, varying in both level design and the opportunities presented within them, there is a lot of content here. The replayability of these levels is enhanced by the semi-procedural elements and this was an excellent inclusion. There are also unlockable characters which have different perks to keep things interesting. It may not be enough for some, however, for the price point, you will be hard-pressed to find games offering much more. I love the idea, I like the execution and I am very much looking forward to jumping back in to cause some more mayhem!