I first played Elder Scrolls Online when it initially came out on the Xbox One back in the summer of 2015. I didn’t get addicted to it the same way I did with World of Warcraft when I was on gardening leave for 3 months back in 2007 but I had a reasonable go of it. The thing I most remember about those early days was that it was graphically predominantly brown, though I accept I may be remembering things entirely wrong.

Since those heady days, it’s had a few expansions including a Morrowind one. Now Morrowind is the third core Elder Scrolls game and also the one that got me into the series, I got the game of the year edition on the original Xbox console and absolutely hammered it, as I have with Oblivion and Skyrim subsequently. Therefore the Morrowind expansion piqued my curiosity for getting back on Elder Scrolls Online so I picked it up on the PS4.

It turns out that the game requires you to have a PlayStation Plus subscription (and presumably the same on Xbox Live Gold). There is an in-game subscription too but that’s entirely optional, you don’t need it to play but it seems like you get a set amount crowns each month, which is the purchasable in-game currency that allows you to buy things like DLC packs, outfits, mounts and things like that.

The first order of business was to remember what my previous profile was as I wondered if I could use my old character. After the usual password reset rigmarole I managed to re-access the old profile and it turned out my old character was well and truly gone. I’m unsure whether this was due to the console shift or just passage of time but either way the end result was the need for a new character.

The character creation is pretty much in line with the other games in the series and did its job of driving me insane. Character creation is a nightmare for me, it’s taken me absolutely ages because I have to check every possible customisation option that’s available to me. Took me about as long as normal to actually create my character but I eventually did and I was ready to start the game properly.

The first thing I noticed on starting the game is how much more colourful it is now, I’m not sure if it’s the new starting area in Morrowind that’s the reason for this or if it’s just 3 years of work being done on the game to improve it but either way it’s a much better-looking game overall than the one I remember. I’m looking forward to seeing if there are any further improvements when the latest expansion, Summerset, is released.

The controls are a little different to the main games, nothing too onerous to learn but a little odd when you’re used to certain buttons carrying out certain actions. I’m also having to get used to the inventory system, usually you have a weight limit which if you go over it you can’t run and whatnot, there are no real limitations but in ESO you have set number of slot in your inventory (which can be expanded), this has meant I’ve had to unlearn some deeply ingrained hoarding tendencies and not just grab everything I see.

Getting through the introductory segment puts you on the map proper and while I haven’t found it to be quite as intimidating as previous games it’s still pretty big. I also assume that there’s more than one given that this isn’t the same starting point as it was 3 years ago. Lots of exploring to be done though which is always a big part of any Elder Scrolls game, I’ve always been a big fan of sometimes taking the time to wander around aimlessly and see what I stumble upon.

There also seem to be quite a few people playing at any given time (at least when I’ve been logged in), I’m unsure how helpful everyone is as I’ve avoided interaction where possible but the game does seem to gently encourage you to work with other players. I’ve had a couple of encounters where I’ve taken a kicking from enemies where I don’t think I would have if I’d been part of a party. It could also be encouraging me to grind and level up though.

There seems to be plenty of quests so far, I appear to have acquired a fair few already. There seems to be a limit of how many you can have at any given time but some of them seem to be pretty easy to get done and dusted, though I concede this may be due to how early in the game I currently am. Some of the quests I’ve done I’ve been under levelled for so I need to come back to them when I’ve toughened up a little. 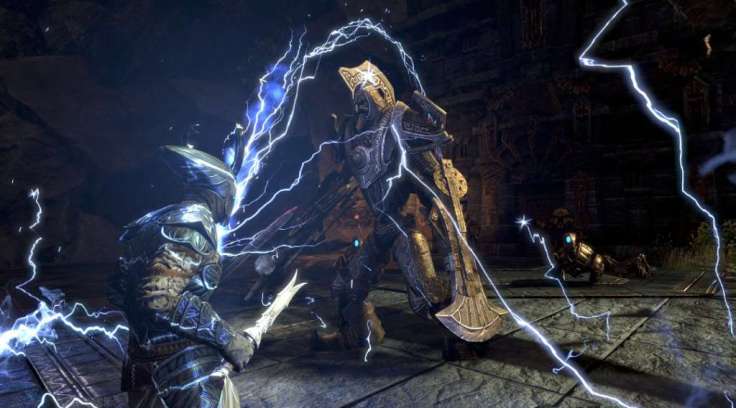 All in all, it’s been fun to get back into the game, I could’ve done without having to re-subscribe to PlayStation Plus but such is the way of things. I’m looking forward to seeing where the game goes over the next 12 months, it’s nice to have a game like this where I can dip in and out when I feel like a little aimless adventuring. I may have to start socialising a little though which traditionally always goes well for me. In short, I’d recommend Elder Scrolls Online as being well worth a look.